The actor, 38, who is accused of staging a racist and homophobic attack on himself calls the  case ‘frustrating’ and said he does not think the case will be finished soon.

Speaking for the first time since February 2019, in an interview with author and academic Marc Lamont Hill, 41, yesterday, the former Empire star revealed his lawyers filed a motion against his indictment, which will be reviewed by a judge later today.

But he said he did not feel confident about the case case coming to a swift conclusion any time soon. 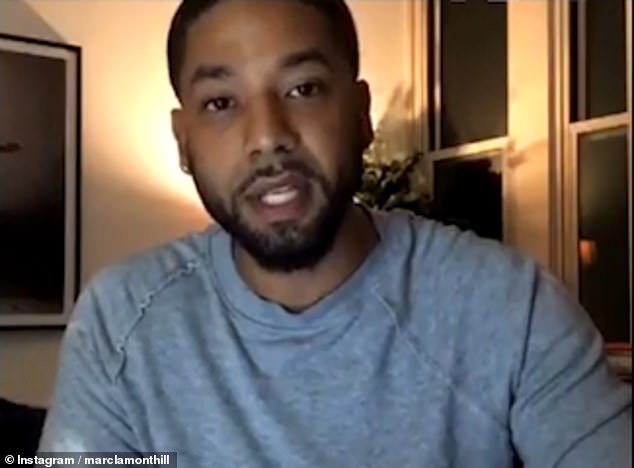 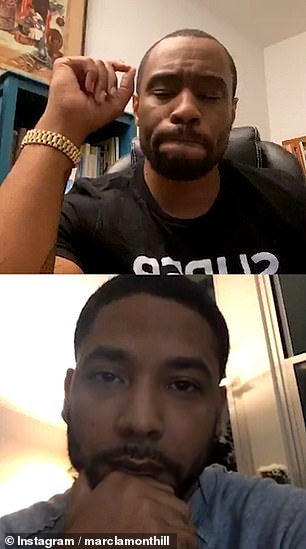 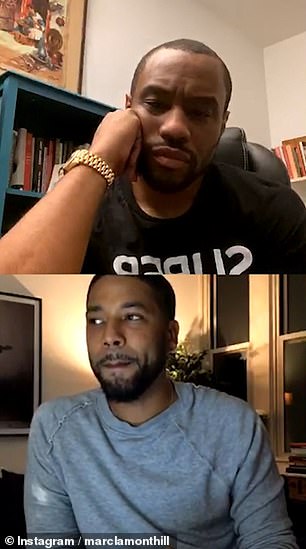 Mr Smollett said his lawyers filed a motion against his indictment, which will be reviewed by a judge later today, but he does not think the city of Chicago will ‘let this go’

Speaking on Mr Lamont’s Instagram, he said: ‘I’m going to give it up to God, but if I’m being completely honest, I don’t think that… they’re not going to let this go.

‘On one hand, when I step back, I see how [Chicago Police] played the narrative, the way that they served it to the people. That it was intentionally created to make people doubt from the very beginning.

‘From the very, very beginning, it was made to seem that I was lying about something or everything. But at the same time, I’m not really living for the people who don’t believe.’

The city of Chicago have requested that the FBI hand over records of their own probe into Mr Smollett’s case.

Asked how he was feeling, the actor responded saying the question ‘baffles’ him at the moment.

‘The one thing I always wake up [and think] no matter how I feel is that this is an opportunity to have a real conservation in our own communities about truth.

‘The thing that really gets me is the fact that there are black and brown women and men behind bars for things they did not do.

‘I am certainly well informed about the plight of us. What happened in these last two years, it has humbled me in a way that nobody could possibly understand.’ 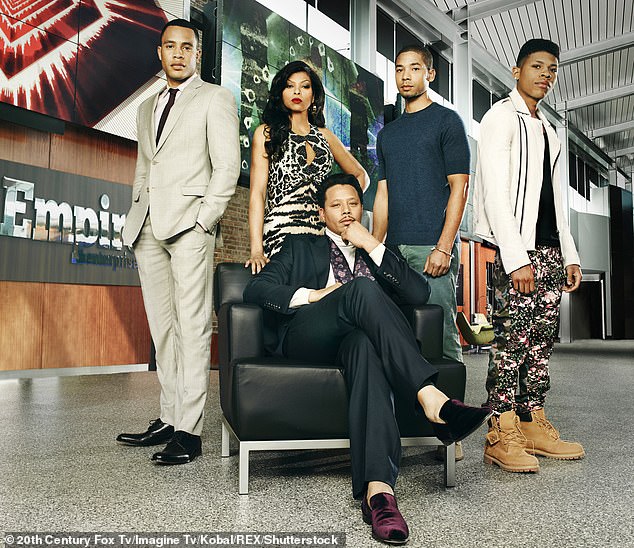 Mr Smollett was fired from Fox’s hit series Empire as a result of the scandal. He is pictured fourth from right with his co-stars in 2015 – Trai Byers, Taraji P Henson, Terrence Howard and Bryshere Y. Gray

The saga around Jussie Smollett began on January 30, 2019, when it emerged he claimed he had been the victim of a racist, anti-gay attack.

At the time, it seemed he had been walking home from Subway in the  middle of the night after returning home late on a delayed flight when he was approached.

He told police afterwards his attackers identified him from the show he was on, Empire, and called him both the N-word and ‘f****t’.

He said they beat him, poured bleach on him then put a noose around his neck.

Mr Smollett went back to his apartment where his friend, Frank Gaston, was. It was Gaston who insisted they call police. 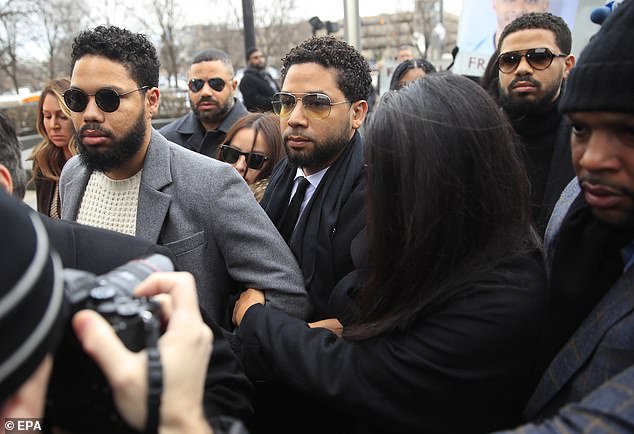 When officers arrived, the actor refused to hand over his phone. He went to the hospital to be checked over but had no major injuries.

The Chicago Police Department vowed to investigate the incident with all its might, and celebrities around the world rushed to share their support of Smollett.

But as the police investigation progressed, leaks began from within the police department that all may not have been as it seemed.

As the controversy grew, Smollett – determined to make his case – went on Good Morning America in February 2019, where he cried and insisted he was telling the truth.

By then, Chicago PD had released grainy surveillance camera footage of two men walking near the scene of the incident itself which was among the only part of his journey not captured on Chicago’s vast network of security cameras that night.

Smollett unequivocally identified the two men in the grainy footage as his attackers.  Neither their faces nor skin color could be made out in it.

Unbeknownst to him while he was conducting his GMA interview, the Chicago PD was building a case against him.

January 30: A wave of public sympathy rushes over Smollett, until then a relatively unknown actor

February 14: After a series of leaks from the Chicago PD, Smollett goes on Good Morning America to plead his case.

Unbeknownst to him, brothers Abel and Ola Osundairo are being interviewed by police after returning from Nigeria.

February 20: Smollett is arrested and accused of lying to police.

They had identified the people in the video as the Osundairo brothers and had backed-up their belief by tracking the pair’s movements in the days and hours both before and after the incident.

Smollett was eventually arrested and charged with suspicion of lying to police. The brothers flew to Nigeria within hours of the January 29 incident and missed the media storm which followed

When they landed back in the US, police investigators were waiting to question them.

After hours of secret interviews, they told cops that Smollett had paid them to carry out the attack as part of an elaborate hoax. Smollett was then arrested.

In an extraordinary press conference afterwards, then police chief Eddie Gallagher accused him of inflaming race relations in Chicago and of wasting police time.

He said that Smollett had tried to leverage the ‘attack’ to get his bosses at Empire to pay him more.

The case then went to a grand jury which returned a stunning, 16-felony indictment that would have put Smollett behind bars for more than 50 years if he had been convicted.

By then, Foxx had informally recused herself from the case.

They said they were worried by the number of leaks that had come from the Chicago PD and asked Foxx to help. She said she would try.

After the grand jury indictment, the case stalled for a few weeks.

Then, in March, Foxx’s deputy Joseph Magats – who had taken over – announced the decision that the charges against Smollett had been dropped.

Foxx had intervened again, it emerged, and pointed to what they called ‘alternative prosecution’ whereby Smollett, a first-time offender, was let off with a $10,000 bail forfeiture and community service.

There was outrage and calls for Foxx to be investigated herself for prosecutorial misconduct.

As judges and special prosecutors for that task were tossed around, the city came out swinging in civil court. 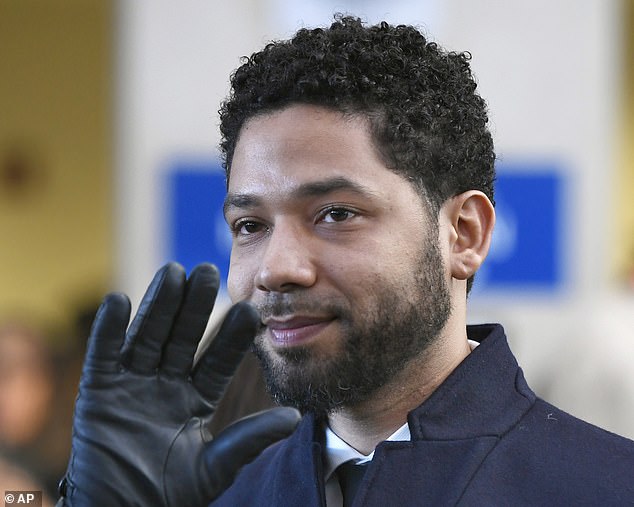 In March last year, Foxx´s office surprised and angered many in Chicago by dropping charges that accused the former ‘Empire’ actor of staging a racist, homophobic attack against himself

They sued Smollett, asking him to reimburse them for all the money they said they’d wasted investigating what they believed were bogus claims.

He lost his job on Empire and became a pariah in the showbiz world he was allegedly trying to ascend through.

Webb was appointed in August to investigate why Foxx’s office had dropped the charges.

He himself faced criticism and claims of another conflict of interest when it emerged he had donated $1,000 to Foxx’s re-election campaign once.

Jed Hoyer Had a “Hard,” “Good” Conversation with Kyle Schwarber About the Non-Tender Decision – bleachernation.com