The first official trailer for Kate Winslet and Saoirse Ronan‘s “Ammonite” has arrived.

The film centers on the blossoming relationship between Mary (Winslet) and Charlotte (Ronan) as the latter takes up an apprenticeship under Mary, a renowned paleontologist.

The trailer opens with a montage of Mary carrying out her work of finding fossils, cleaning them and more before Charlotte and her husband pay her a visit.

“My wife, she hasn’t been at all well of late,” says the husband, played by James McArdle. “She suffers from melancholia. I want her to walk the shoreline with you, learn from you.”

“I’m not looking for an apprentice,” Mary insists, but Charlotte’s husband offers a handsome payment, swaying the scientist.

The trailer then follows the pair as they work along the shoreline, despite Charlotte’s confession that she doesn’t “like the water.”

However, as the clip moves forward, Charlotte becomes more and more enthralled in the “beautiful” work that they do.

Eventually, the two engage in a kiss.

“I don’t want to go back to the life I had before you,” Charlotte says.

Mary responds: “What about my life?” 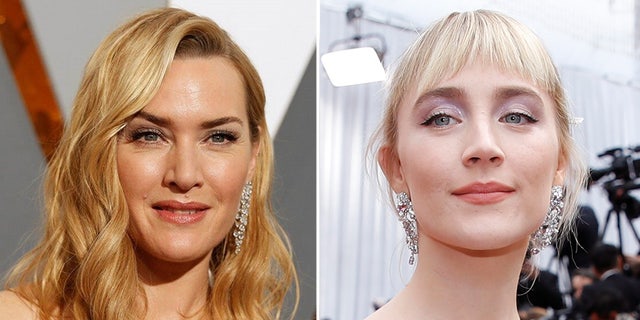 Kate Winslet (left) and Saoirse Ronan star in ‘Ammonite’ as paleontologists who fall in love in 1840s England.
(Reuters)

The final shot features the two sitting on the shoreline. Charlotte smiles as Mary offers a somber look.

The film, set in 1840s Southern England, is set to premiere at the Toronto International Film Festival next month before hitting theaters on Nov. 13.

“Ammonite” — a reference to the classic cephalopods whose fossilized shells can be found on the coast — is produced by Neon, and directed and written by Francis Lee.